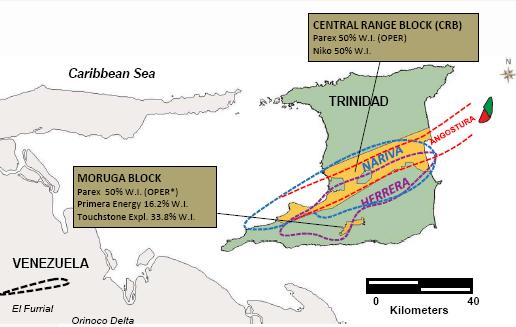 Canada-based oil and gas company, Touchstone Exploration has announced positive results from the first tests on a liquids-rich gas deposit in Trinidad and Tobago.

During the 14-hour extended flow test period, production peaked at 5,736 barrels of oil equivalent per day (boe/d). This includes 30.2 million cubic feet of natural gas per day and 710 barrels of natural gas liquids per day.

The company examined the deepest 162ft of the 777ft deposit, part of the Ortoire exploration block on the island of Trinidad. It has an 80% working interest in the block, while Heritage Petroleum has 20%. Initial testing was suspended because of high pressures and natural gas volumes.

Current tests show no hydrogen sulphide in the deposit, with little water. The test well will be shut-in for two weeks for a pressure build-up survey. During this time, the company will test the upper area of the deposit.

In a statement on Monday Touchstone’s President and CEO, Paul Baay highlighted that, “The Cascadura production test results represent a dramatic change for Touchstone, as it confirms the monumental resource potential of the Ortoire exploration block following the earlier success of our Coho-1 well. ”

For his part, James Shipka, Chief Operating Officer noted that ”these discoveries provide further confidence as we move forward with two further exploration wells at our Chinook and Royston prospects which are targeting separate structures along the same geological trend.”