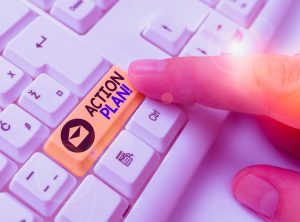 “Progress is a nice word. But change is its motivator. And change has its enemies.” – Robert Kennedy

Change does have enemies and Robert Kennedy knew that truth and paid for it with his blood. Change can be dangerous. That is why our natural instinct is to stay the course; stay put; avoid trying something new; leaving well enough alone; being safe; and I could mention another twenty or so excuses. If you are the type that wants to stay in your comfort zone, you will never experience the immense joy that comes from living. In order to succeed we must take risks and that means we have to change. Robert Kennedy said this in the context of politics. He referred to making progress as a nation. The only way to make progress as a nation is to change our point of view, to change the way we govern ourselves, to change certain laws that are unfair, and change the way we deal with the bad guys.

But his words can apply to any aspect of life, not just politics. In my career as a Consultant I can say that change is the one thing that is needed the most and done the least. I have seen people go way out of their way just to avoid change. I trained several accountants in my early days as a Lecturer . Let me tell you that there were times I couldn’t even get an adult to change their seat after 20 minutes of being seated in class. That is how ridiculous we can get about change. We all need to train ourselves to be more open. But it goes further than that.

Change is an action word and that means we need to act if we are going to progress. Change is not a theoretical practice of the mind, it implies real physical movement. For example, we may say that we have changed our attitude towards someone, but unless that is followed up by an action towards that certain person, they are only shallow words. Change means to repent. I instantly scare people away as soon as I say that because of the religious overtones. Well you can apply this to religion if you like. All I am saying is when someone says to you to repent, it simply means to change what you are doing.

Change requires 3 things. The first is to recognize the need to change. The second is you actually do the action that is required. The third is you maintain the new course of action. Those happen to be the same three things involved in repentance. They say that recognizing that you need to change is half the battle and that is so true in my experience. The changing part is actually a lot less difficult to do than the first part which again is recognizing that you need to change. The final part is easy. It just requires that you keep on doing the new action over and over again. The second part in the middle means you must turn around and do something different to prove that what you recognized as needed to be done will be done. Change is empowering no matter how small it is as long as it is positive. Today, why not give change a chance and perform an action that you know needs to be done in your life. You will be gratified and empowered when you do it!

We invite you to get a copy of Dawgen Global publication :“6 Ways to Approach Change” 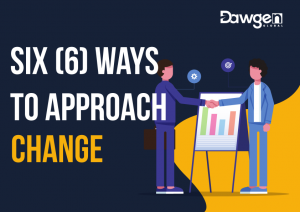