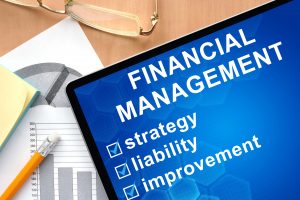 Good financial management is key to running a successful business. The company needs to be on top of its accounts to ensure they are not spending money they don’t have, and to keep an eye on specific areas that are costing them money so that any problems, potential or realized, can be rectified. Bookkeeping is a way of recording the transactions of a business, and accounting is the overall analysis of the company’s performance.

Every single transaction the business makes should be recorded in a cash book, however seemingly insignificant the amount. Problems can and will occur where records are inaccurate or entirely missing. Businesses need to be able to account for every single penny that passes through their hands, both for their own benefit and that of the law – a yearly audit will soon highlight any irregularities and the company could be heavily penalized. Cash should be forecasted on a weekly and monthly basis, to help the company set a realistic budget that they should stick to. If they record projected spending/earnings, it is easier to see the areas which aren’t performing up to standard, and to target the reasons why. Business need to plan for any short or long term cash requirements for their various growth projects, rather than planning for the profit figures they hope to achieve.

Deposit accounts can be used by businesses to gain interest over a set amount of time on money that is not needed for the day to day running of a business. For example, a business could put away a lump sum for a year, and gain a higher rate of interest on it than they would in a regular account. There are restrictions on a deposit account, however, such as withdrawal conditions, which will be set when the money is deposited. This means money can only be taken from the account as specified intervals, so this could be risk if the money is likely to be needed in any emergency situations. However, they are seen as a fairly safe place to keep money, as interest rates are often guaranteed not to fluctuate over the duration of the deposit.

Trade finance is another form of lending other than the traditional banking facilities offered, whereby trade financers will help fund the payments need to pay suppliers for their raw materials, finished goods, etc.

Trade finance is considered a cheaper method of lending than typical overdrafts/loans, as the interest rate (payback) is lower than that of the banks. On top of this, it can be notoriously difficult to persuade banks to increase overdraft amounts, which can really leave a business struggling if they have no other way to raise the necessary capital to fund their project. Often business will receive large, potentially very lucrative orders, which on completion will generate a large profit; however they struggle to raise the initial money to be able to actually complete the order, which is where trade financers can step in to help, providing the initial funds needed without demanding an extortionate amount for the profits in return.